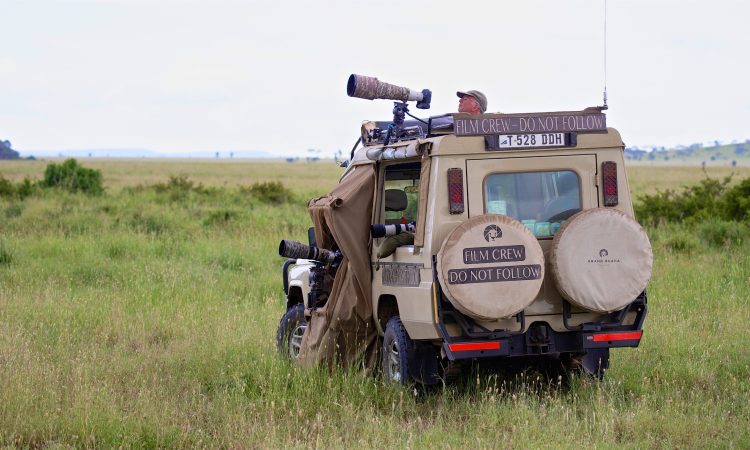 Tanzania filming safari tour: all you need to know about Filming safari Tour in Tanzania: Tanzania has been a hotspot for filmmakers for decades, attracting and welcoming so many filmmakers from all over the world due to the abundance of breathtaking attractions that exist there, such as the majestic snow-capped mountain Kilimanjaro; the seven natural wonders of Africa, the great wildebeest migration in Serengeti National Park; and the largest crater in the world, the Ngorongoro crater. Film teams continue to visit Tanzania to capture breathtaking footage for everything from National Geographic documentaries to Hollywood movies like John Wayne’s Hatari (1962).

Tanzania has various unique locations that draw geologists, anthropologists, scientists, and film crews. Tanzania continues to lure tourists because of its amazing characteristics, including Lake Tanganyika, Mount Kilimanjaro, endangered species, the Great Migration each year, the Hadzabe Tribe, the traditional Maasai society, the active volcano Ol Doinyo Lengai, and many more. Please be aware that professional camera crews and filmmakers are required to pay additional fees and seek special clearance from the government. Please take note that the following information only relates to filming on Tanzania’s mainland. You will require a unique permit if you are working on a project in Zanzibar.

WHAT KIND OF FILMING DOESN’T REQUIRE A PERMIT IN TANZANIA?

The word “professional” is crucial here. You should be able to shoot as many images and films as you like if the movie is intended for personal use. In Tanzania, the following types of filming are permitted without a special permit:

WHAT FILMING REQUIRES A PERMIT IN TANZANIA?

But keep in mind that being professional does not necessarily equate to being “commercial.” It refers to all footage captured with equipment other than typical amateur cameras. Permission is still required even if you use large cameras and are recording for fun or for an NGO. Please read the following information carefully if you are a professional photographer, filmmaker, videographer, documentary maker, or journalist.

WHAT PERMITS ARE NECESSARY FOR TANZANIAN FILMING?

For filming Tanzania safari tour in Tanzania, there are several permits that are required. These includes:

You must obtain this permit first because it is the most crucial one. You won’t be qualified to receive additional permissions until you’ve received this one.

The Tanzania Film Board requires a $1000 USD fee from all filmmakers. The application for a permit must be submitted 30 days before filming begins, and processing time can last up to 2-3 months. So be sure to submit your application early. It is feasible to speed up this process if you need to. The application can be processed in as little as 7 days for $3000 USD.

What information is necessary to get this permit?

To ensure that your permit application is approved and that there are no delays, include all the information required. This data contains the following:

If you are a member of a film crew, you cannot visit Tanzania on a tourist visa and must instead apply for a business visa, which permits holders to stay in Tanzania for three months. An invitation from a Tanzanian-registered host organization is always required for a business visa.

Validity of the Tanzania Censorship Board filming permit

The permission is good for three months after it is issued. You must finish all filming within this time frame, or you will need to reapply for a permit.

The major commercial hub in the country, Dar es Salaam, is where applications should be sent. Due to its size, Dar es Salaam is unfamiliar to many people outside of Tanzania. If you’re concerned about managing this process and obtaining all necessary permits, Focus East Africa Tours can help. Our team is knowledgeable about all the hazards and complexities of the process, and because we are situated in Tanzania, our associates can easily and swiftly obtain the permit.

A copy of the film is to be provided.

Following the completion of filming, all filmmakers are required to give a free copy of their work to the Tanzania Film Board.

You must submit an application to the Tanzania National Parks Authority in Arusha. At the time of application, a Tanzania Filming Board permit must be shown. Fees paid under this permit includes:

TANAPA filming fees are charged per day and currently stand at:

The majority of all park fees—camping and conservation—are also included in the filming fees. This implies there won’t be any extra expenses for spending the night in the parks. Once TANAPA accepts the filming project, fees are paid. The payment is made using a unique internet platform.

Apply at the Ngorongoro Conservation Authority in Arusha and show the Tanzania Film Board-approved permission.

It costs $300 USD per day to film in Ngorongoro. The cost includes both the camping and the guiding. However, it excludes motor vehicle and crater service expenses.

A copy of the film to be presented

After filming is over, all filmmakers are required to give a free copy of their work to the Ngorongoro Conservation Area Authority.

IMPORTATION OF THE FILMING EQUIPMENT TO TANZANIA

The logistics of transporting equipment to the shooting location are something that production teams frequently overlook when organizing projects in Tanzania. Additionally, it might occasionally result in annoying misunderstandings when entering customs at the airport after arrival. All the other paperwork and preparation work could be in vain if a customs official refuses to permit the importation of film equipment.

The crew must leave a 100% market-value security deposit of the imported equipment upon entry into Tanzania in order to prevent the unauthorized sale of such equipment (duty-free). When the team has finished filming and can demonstrate that they have returned to their home country with the necessary equipment, the security deposit will be released as a bond (as they pass back through customs).

Although it shouldn’t be difficult to get your deposit back, it is a good idea to engage a reliable, local business to help you communicate with the airport and customs officials to prevent any difficulties or delays.

A licensed broker may also be utilized, but you will have to pay the broker 10% of the equipment’s value, so your deposit will not be fully refunded. Prepare a list of the equipment you brought, including the serial numbers of each piece of equipment and its market value, to make things easier. Long-term, this will save you time, money, and hassle.

In Tanzania, using drones especially in protected areas is absolutely prohibited. Each drone project needs to be approved by a number of authorities. Even tiny, personal drones fall under this rule.

Please be aware that customs officials at the airport will seize the drone unless the permits listed below are ready and submitted when you arrive.

Permission from the Tanzania Film Board is necessary.

One should submit an application to the Tanzania Civil Aviation Authority headquarters in Dar es Salaam to obtain this permission. Both a cover letter and an application form are required. Make sure to get the following details ready:

The Ministry of Defense will send an army officer to travel wherever your film crew is. He will watch to make sure the drone doesn’t fly over any forbidden territory. These officers are all highly smart, courteous, and discrete. When working on your project, you won’t even notice they are there. Additionally, they make great friends and conversation partners. But keep in mind that, per the rules, the film team will be responsible for paying the officer’s travel, lodging, and food costs, Tanzania filming safari tour.

Obtain authorization from the Tanzania National Parks Authority before shooting in any national parks.

TANAPA and Ngorongoro Conservation Area Authority special licenses for drone filming are required if you intend to shoot in the national park. One must present all other permits, such as those from the Tanzania Film Board, TCAA, and Ministry of Defense, in order for that to happen. Once that is done, TANAPA and the NCAA will grant approvals. Additionally, there are filming expenses.

Why is operating a drone so heavily regulated?

Many individuals inquire as to the rationale behind these stringent laws. The existence of military sites and specific pieces of essential infrastructure is the very straightforward cause.

What else should be taken into account when planning to film in Tanzania?

Always ask for permission before taking an image or interviewing a person in Tanzania. Tanzanian society is extremely traditional and delicate. In Tanzania, many tribes represent distinct cultures, and some of them are quite protective of their privacy, as would any normal individual. Imagine that someone took a snapshot of you without first getting your consent. That wouldn’t be to your liking, would it?

It is crucial to get consent before recording someone’s picture for a photo or video in order to be culturally sensitive and protect the dignity of all people. Similarly, before conducting a personal interview, In addition, you must obtain the consent of the subject’s guardian or caregiver before photographing or filming a minor (a kid or dependent).

Filming of certain locations and persons is restricted.

It is never permitted to photograph military outposts, police stations, government buildings, or other essential infrastructure. This holds true for banks and several other institutions, as well as the Arusha-based East African Court of Human Rights. If you don’t have explicit authorization, you shouldn’t film members of the Tanzania People’s Defense Force (army), the police, the government, or the clergy.

Only with the express authorization of a parent or other legal guardian (such as a school director or parent) is it permitted to film or interview a youngster.

Focus East Africa Tours can help you with Tanzania filming safari Tour: The Focus East Africa Tours Team is a comprehensive destination-management organization, not merely a tour operator. We are skilled in handling and delivering pertinent paperwork to the right places. We also have experience importing equipment via customs after arrival and obtaining authorization for the use of drones to photograph animals. Reach out to us, and we’ll be happy to assist you! To make sure your film safari project in Tanzania is a success, work with Focus East Africa Tours.