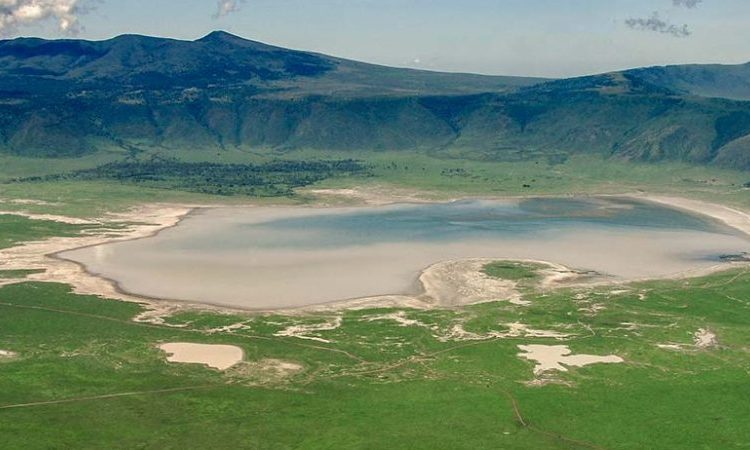 Formation of Ngorongoro Crater : Ngorongoro crater is found in the Great Rift Valley and is a wildlife viewing destination in the northern part of Tanzania.

The Ngorongoro crater was formed over 2 million years as a result of volcanic activity when a volcano erupted and collapsed forming a caldera. The crater is about 600 meters deep and is made up of grasslands and woodlands where different wildlife species can be spotted.

The crater is also known as the world’s largest inactive caldera and was designated as a UNESCO world heritage site in 1979. Ngorongoro crater is part of the Ngorongoro conservation area of Tanzania.

The caldera is fed by two river which are river Munge and Oljoro Nyuki river. The different volcanoes around Ngorongoro include Oldeani, Empakaai, Ol donyo lengai, Sadiman and also Lemagrut.

Safaris to the Ngorongoro crater involve looking out for wildlife species such as elephants, lions, leopards, rhinos, buffalos, zebras, warthogs, gazelles, hyenas, warthogs, wildebeests, elands, hartebeests, cheetahs and many others.

There are also over 400 bird species which can be seen around the Ngorongoro crater and they include black winged lapwing, ostriches, kori bustard, crowned cranes, rufuos tailed weavers and many others.

Apart from wildlife species of the Ngorongoro crater, the Maasai people can also be seen during the safari at the destination since they share the area with the different wildlife species such as the big 5 and many others.

Other attractions to look forward to seeing during a visit around the Ngorongoro crater include the following;

Ol duvai gorge is an archaeological site which is located in the northern part of Tanzania which is also referred to as the “cradle of mankind”.

Dr Louis and Mary Leakey made discoveries of the remains of fossils and stone tools. During safaris to the gorge, tourists visit the Ol duvai museum where they get to know more about the discoveries at the site.

Lake Eyasi is a soda lake which covers about 1,050 square kilometers is found in the Great Rift Valley located south of Ngorongoro crater.

Different bird species can be seen around Lake Eyasi which is also home to the Hadzabe people. The Hadzabe are hunter-gatherers who live around the areas of Lake Eyasi. Tourists during their safaris interact with these locals and get to know about their culture and way of life.

Apart from cultural interactions with the Hadzabe and other locals around the areas of Lake Eyasi, tourists during their safaris engage in activities such as hiking and bird watching.

The Datoga people also live around the Lake Eyasi area and can be encountered during safaris at the destination.

Empakaai crater is a steep sided crater which is about 6 kilometers wide and is found in the Ngorongoro highlands.

The Empakaai crater was formed in a similar way to the Ngorongoro crater and is a collapsed volcanic caldera. Activities which are carried out around this destination include walking safaris while enjoying amazing views.

During safaris around the Empakaai crater, wildlife species such as waterbucks, buffalos, bushbucks and blue monkeys among others can be spotted. Different bird species can also be seen around the crater.

Ol donyo lengai is a strato volcano which is also referred to by the Maasai people as the “mountain of God” and is found south of Lake Natron.

Hiking is among the activities which are carried out on Ol donyo lengai which is at an altitude of 2962 meters. Ol donyo lengai is also considered the highest active volcano of Tanzania.

The lake is a breeding ground for the lesser flamingos and is part of the rift valley lakes. Among the features of the lake are its red waters and it also contains salt, soda and magnate deposits and warm water which favors breeding.

Due to the saline nature of Lake Natron, the lake does not favor wildlife and plant species. The lake is fed by Ewasi Ngiro river and is also in the northern part of Tanzania.

The Maasai villages are located around the Ngorongoro highlands and during safaris; the Maasai can be seen as they graze their livestock like cattle and goats around the grassy plains of the crater.

During interactions with the Maasai people, tourists also engage in activities like visiting the homesteads of the Maasai, interacting with the locals and getting to know more about their culture and traditions among others.