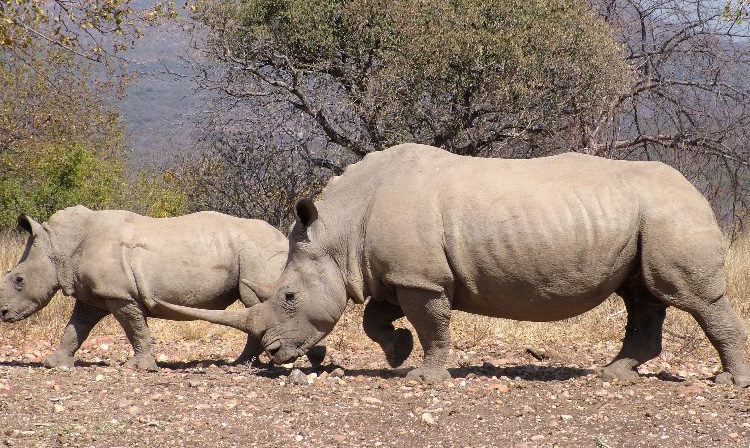 Black Rhinos in Ngorongoro  crater National Park are a rare species whose presence in Ngorongoro has brought a big impact on the tourism industry in Tanzania. Ngorongoro conservation area, which was initially part of the wide Serengeti ecosystem lies in the north-western part of Tanzania. The area covered by Ngorongoro national park is estimated to be 8292 square kilometers. The crowd-pulling feature of the park is the Ngorongoro crater, which is the largest volcanic calderas formed some two to three million years ago and yet it has remained unbroken and unfolded ever since. It is believed to be formed after a large volcano that exploded and collapsed on itself.

We currently have an outstanding number of herbivorous which feed on the short grass covering the crater floor, of which wildebeests, zebras, buffalos, gazelles, elands, are part of them. On the swamp side of the crater, we do have some large animals who find their home on the swamp land. These are the elephants, waterbucks, bushbucks and the most unique rhinos in Africa, the black rhinos in Ngorongoro. They all reside quite happily despite the predators such as leopards, jackals and hyenas thriving in the crater floor and in the midst of the pockets of the woodlands where a huge population of lions can also be found stalking. 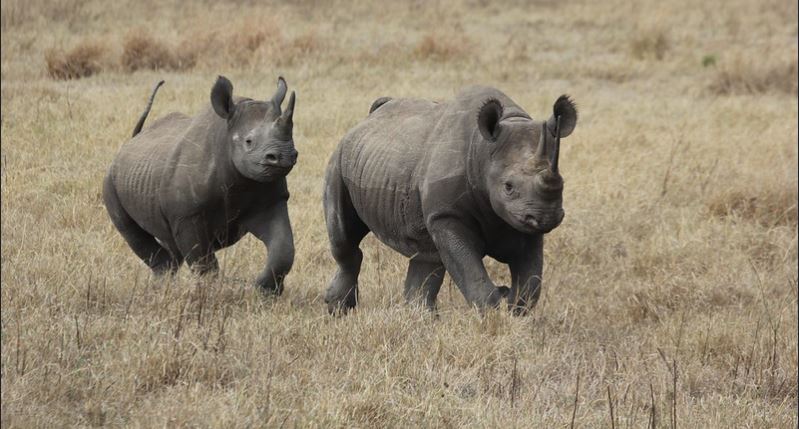 Coming to this unique mammal amongst all in the Ngorongoro conservation area, which has proven to be a blessing to all the tourists spending their moments in the park. These are the black rhinos in Ngorongoro, a species which is a native to the eastern and Southern Africa including Botswana, Kenya Malawi, Mozambique, Namibia, Swaziland, Zambia, Zimbabwe and luckiest ones found in the great Ngorongoro crater. Although they are called black rhinoceros, its color varies from brown to grey and they are sometimes called hook-lipped rhinoceros.

Black rhinos are scientifically classified and placed in kingdom Animalia, phylum Chordata in the class of mammals and their order being Perissodactyla. These black rhinos being in the genus and species of decorous and d-bicornis distinguishes them from the white rhinos. Surprisingly enough, the name ‘white’ in the white rhinoceros has got nothing to do with their color, rather a misinterpretation of the African word meaning wide which mainly referred to the square upper lip as opposed to the pointed or hooked lip of the black rhinos. This species of white rhinoceros is sometimes referred to as the square-lipped rhinos, like black ones being called hook-lipped rhinos. This species of black rhinos are generally grouped into the critically endangered mammals (though the south western black rhinos are classified as vulnerable). Some subspecies have been declared extinct, such as western black rhinos which were declared extinct by the international union for conservation of nature (IUCN) in the year 2011.

The black rhinos present in the Ngorongoro conservation area are generally thought to be solitary, with the early strong bond between mother and her calf. In addition, males and females have a consort relationship during mating, with sub-adults and young adults frequently forming loose associations with older individuals of either sex. They are not very territorial and often intersect other rhino territories. Home ranges vary depending on the season and availability of food and water. Generally, they have smaller home ranges and large concentrations tend to appear on the habitats that seem to have plenty of food and water availability, and vice versa whenever there is a scarcity of resources. Sex and age of an individual black rhino influence home range and size, with ranges of females larger than that of males. This factor is especially when accompanied by a calf.

The sleep pattern of black rhinos in Ngorongoro in their captivities and reservations have been recently studied and has revealed an astonishing fact that male rhinos sleep longer than the female ones. The most shocking part is that the male rhinos can sleep even twice the time the female ones have slept. Among the factors for the sleeping pattern of these rhinos is their sleeping location. Although they do not sleep any longer in captivity, they do sleep at different times due to their locations in captivities or sections of the park.

Adult black rhinos have powerful tube-shaped ears that can freely rotate in all directions. This highly developed sense of hearing allows them to detect sound over vast distances, something which makes them much more unique from the rest. As from all these unique features of the black rhinoceros, it has been the daily struggles of Ngorongoro conservation area authority to ensure that they offer a safeguarded preservation of this creature whose existence on the earth is believed to be on the final days. This preservation is not only enhanced by the Ngorongoro management team, but also spearheaded by the government. This goes hand in hand with political support and financial backing. All these efforts are just to maximize the existence of these rhinos which makes the tour to Ngorongoro national park even more exciting for all tourists.

Our customer support team is here to answer your questions. Ask us anything!
👋 Hello, I am here to help you
Chat with Us